The Top 10 Instagrammable Places in Cornwall

Cornwall has some of the most beautiful places in Britain, from the wild coasts near Land’s End to the gentle countryside of the Roseland. The natural beauty of the Cornish landscape, together with its pretty fishing villages and dramatic engine houses, makes it the perfect place to get those eye-catching Instagram pictures.

Here are some of our favourite Instagram spots in Cornwall.

We’ll start close to The Cornwall and the romantic Lost Gardens of Heligan near St Austell. Discovered hiding behind decades’ growth of brambles and weeds, these elegant subtropical gardens were reclaimed from nature by a massive restoration effort. There are now over 200 acres to explore.

Best photo ops include the Giant’s Head and the Mud Maid, the palatial greenhouses and the staggeringly massive leaves in the jungle garden. 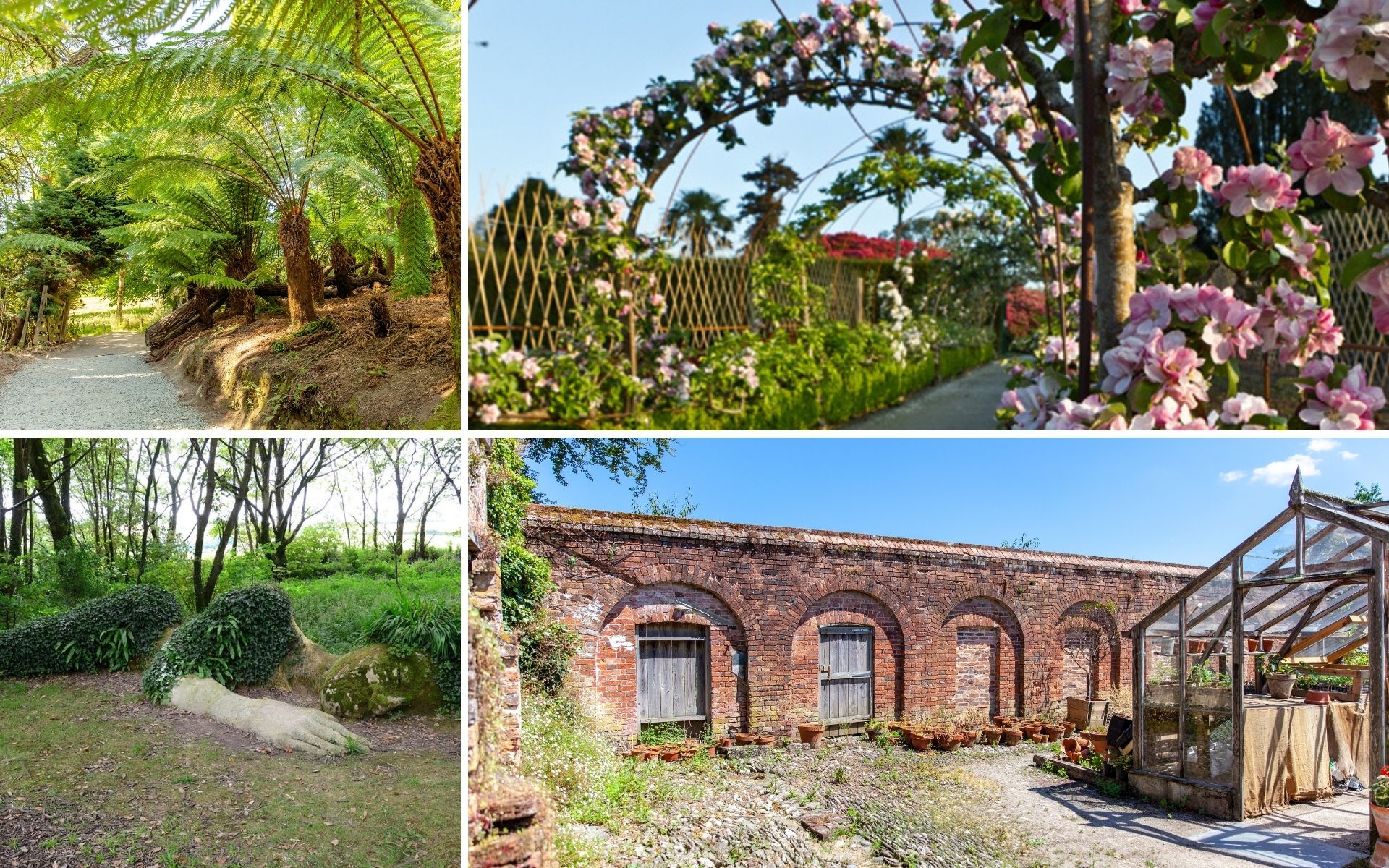 With its white sand and turquoise sea, Kynance Cove on The Lizard Peninsula features in many “This can’t really be Britain!” photographs. Its Caribbean feel is balanced by the mighty cliffs and sea stacks around the cove, which contain the beautiful serpentinite rock that’s found only on The Lizard. 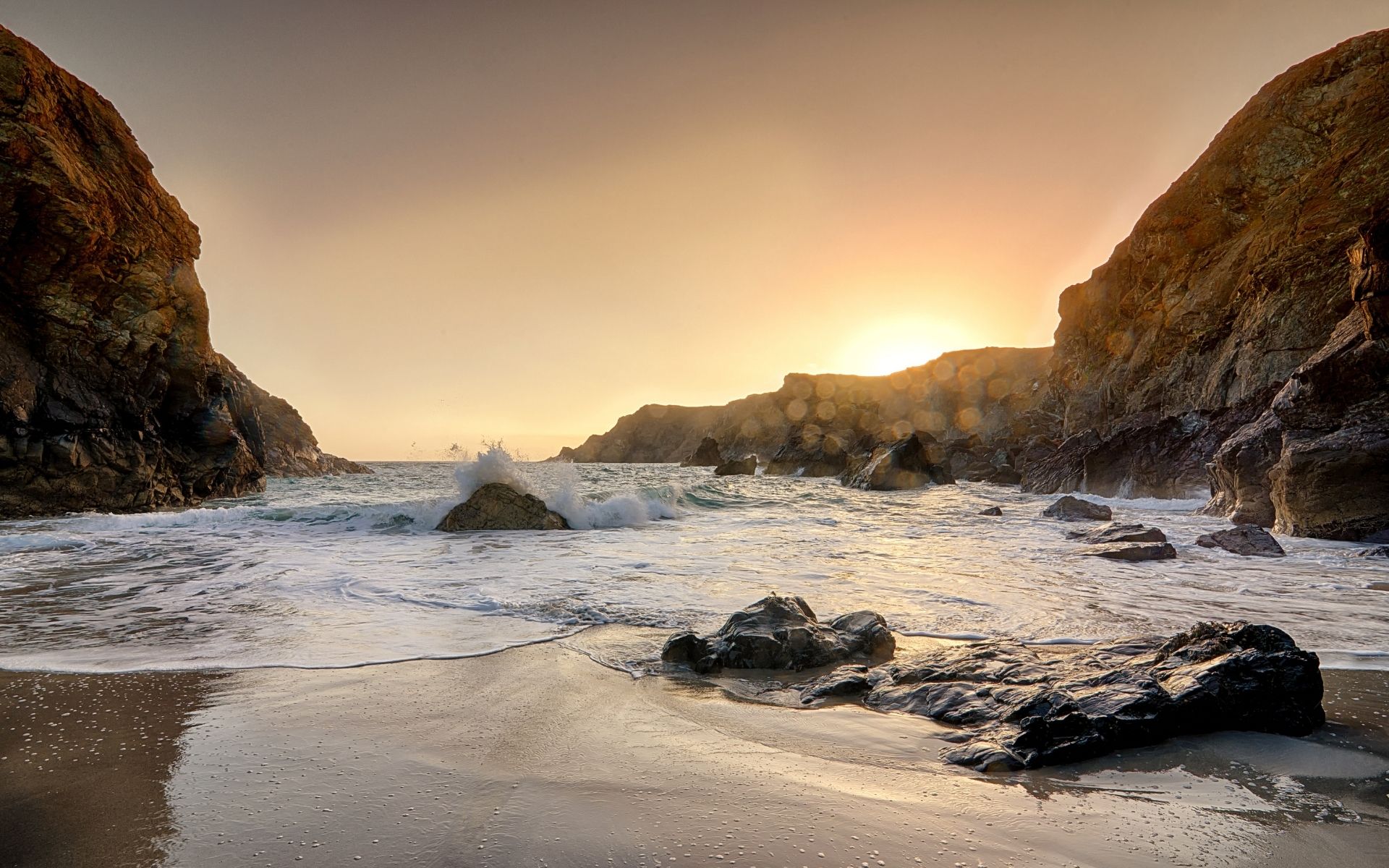 Pick a quiet day if possible – this beautiful beach gets very busy. After you’ve captured your “doesn’t it look tropical” shot, drive further down the peninsula to Lizard village, where Ann’s famous pasties and the Lizard lighthouse await.

The famous biomes at the Eden Project make the classic “we’re in Cornwall” shot. Eden is a wonderful place to visit at any time of year, with a blend of indoor and outdoor attractions, and no shortage of stunning plants to photograph. 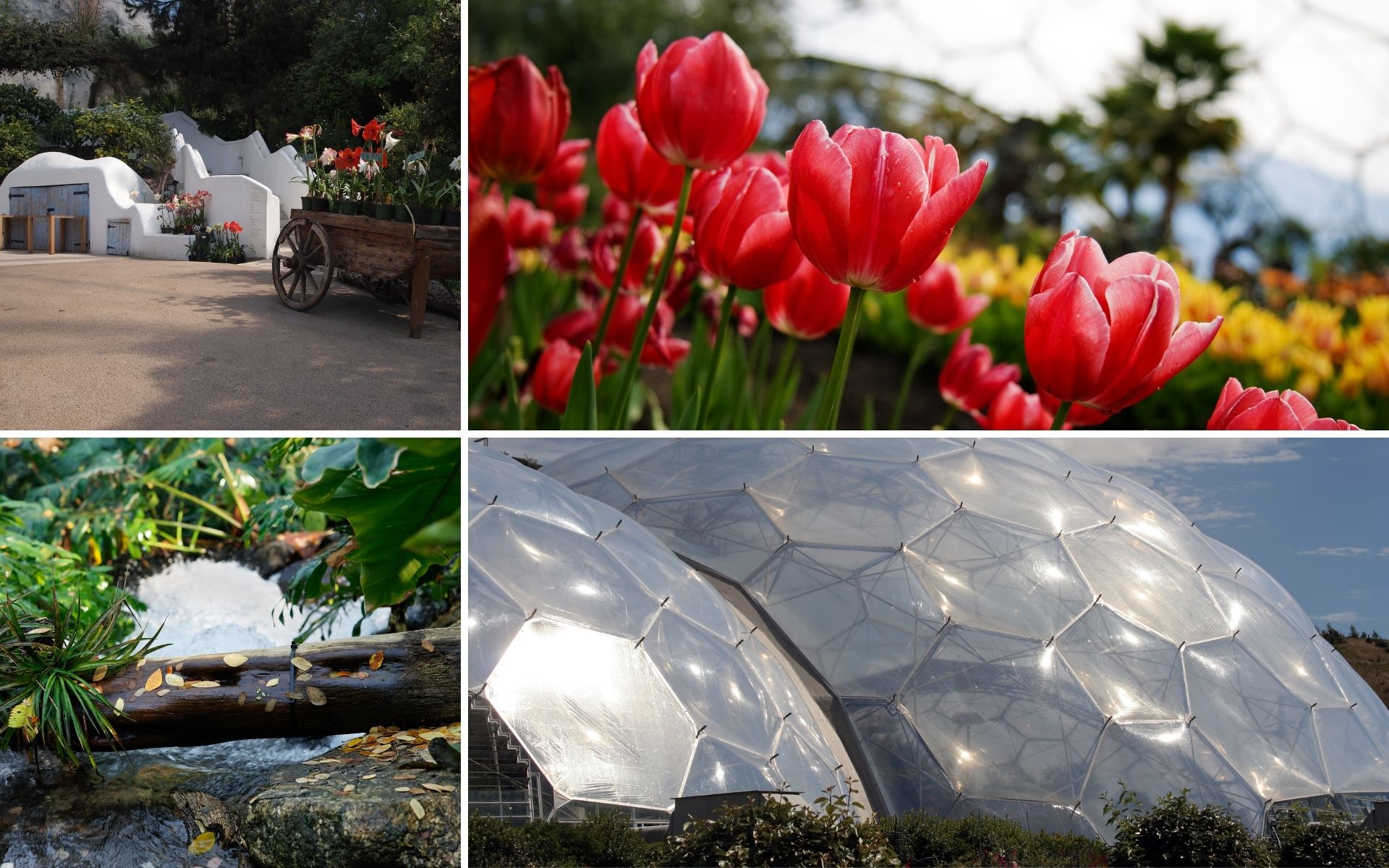 For maximum Insta value, take a selfie as you prepare for the Hangloose zip wire ride across the biomes. Failing that, go for the rope bridge in the Tropical biome or the astonishingly pink bougainvillea in the Med biome.

The stunning Minack Theatre seems to grow out of the granite cliffs above Porthcurno. It was hewn from the rocks by the remarkable Rowena Cade and her gardener Billy Rawlings, and over the decades it’s become one of the most famous outdoor theatres in the world. 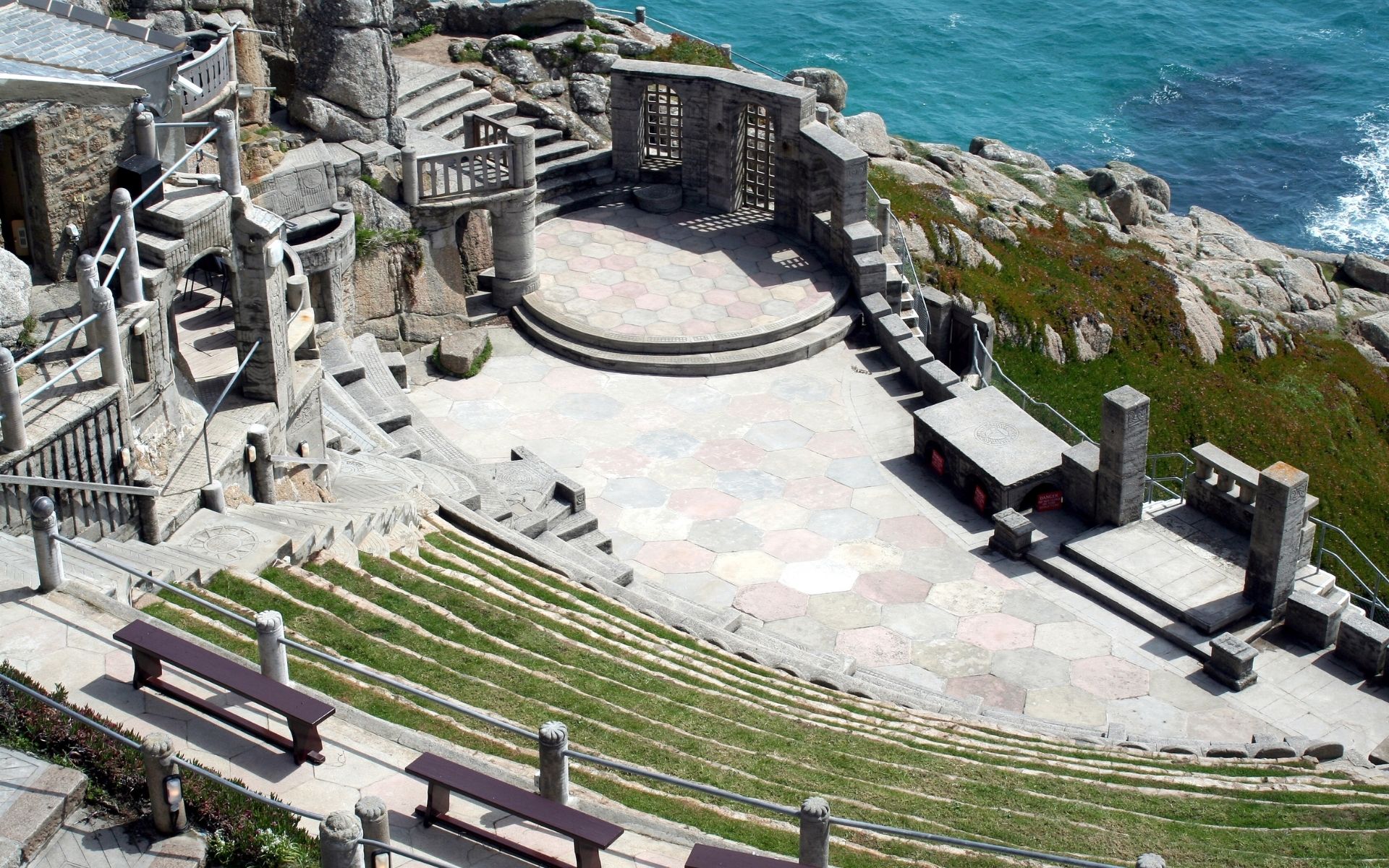 If the Minack is closed, you still get the most glorious views across the sea and beaches from the South West Coast Path. We recommend the 2.3-mile Porthgwarra to Porthcurno walk for stunning coastal scenery. Feeling fit? Carry on along this gorgeous stretch of Cornish coast to pretty Mousehole.

There’s something about St Ives. Even on the gloomiest days, it always puts on a show, with its Med-blue sea and golden sands still gleaming through the mizzle. It’s actually even better out-of-season, where the near-empty sandy beaches and dramatic Atlantic swell create impressive photographs. 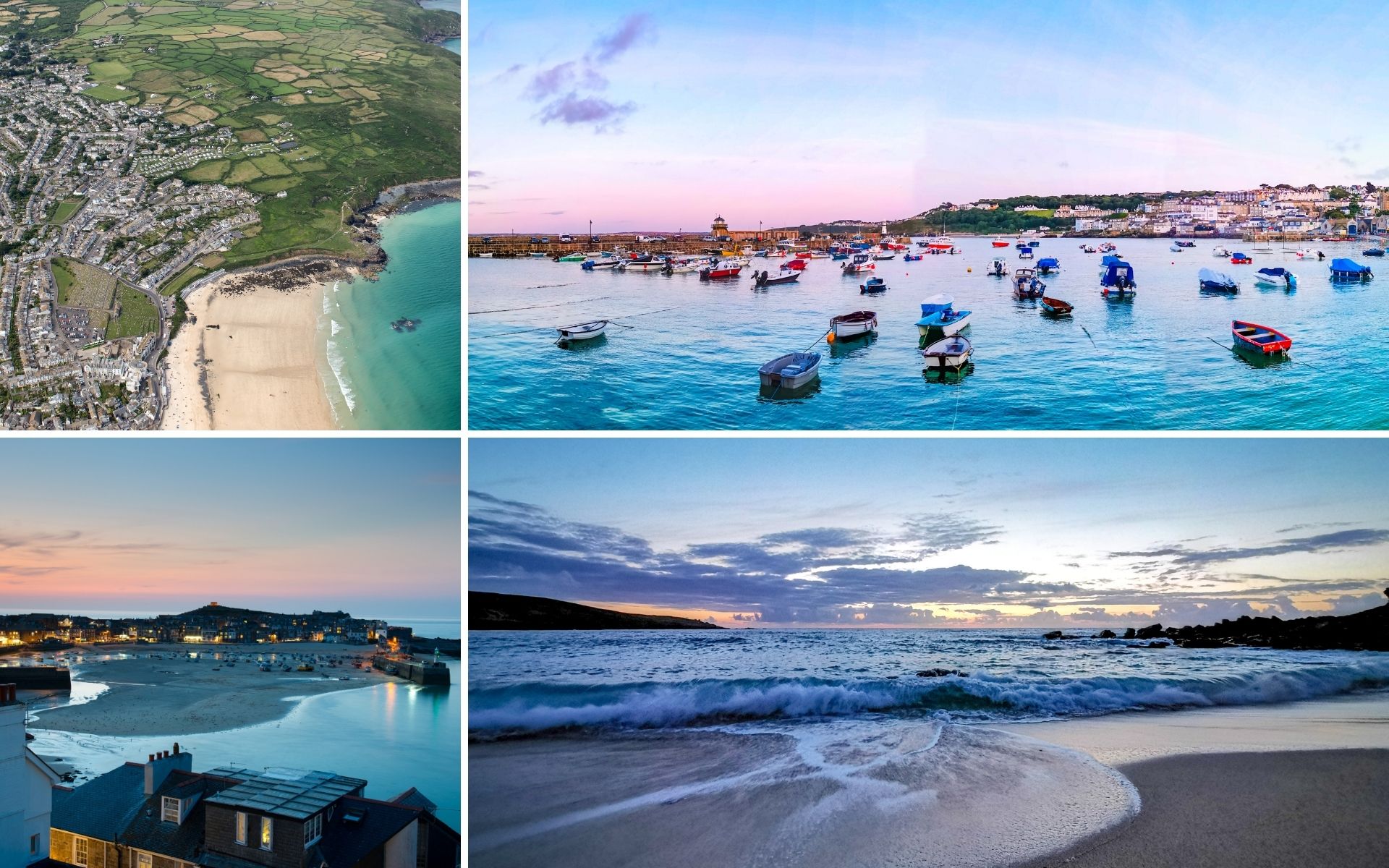 One of the best views of St Ives comes from the Malakoff Gardens at the east end of the town. You look down towards the beaches, the harbour and Smeaton’s Pier, with a Barbara Hepworth sculpture, Epidauros II, providing a unique foreground.

It wouldn’t be a Cornish photo album without at least one picture of this iconic tidal island. St Michael’s Mount is one of the most recognisable landmarks in the United Kingdom, reached by causeway or boat from the old town of Marazion. 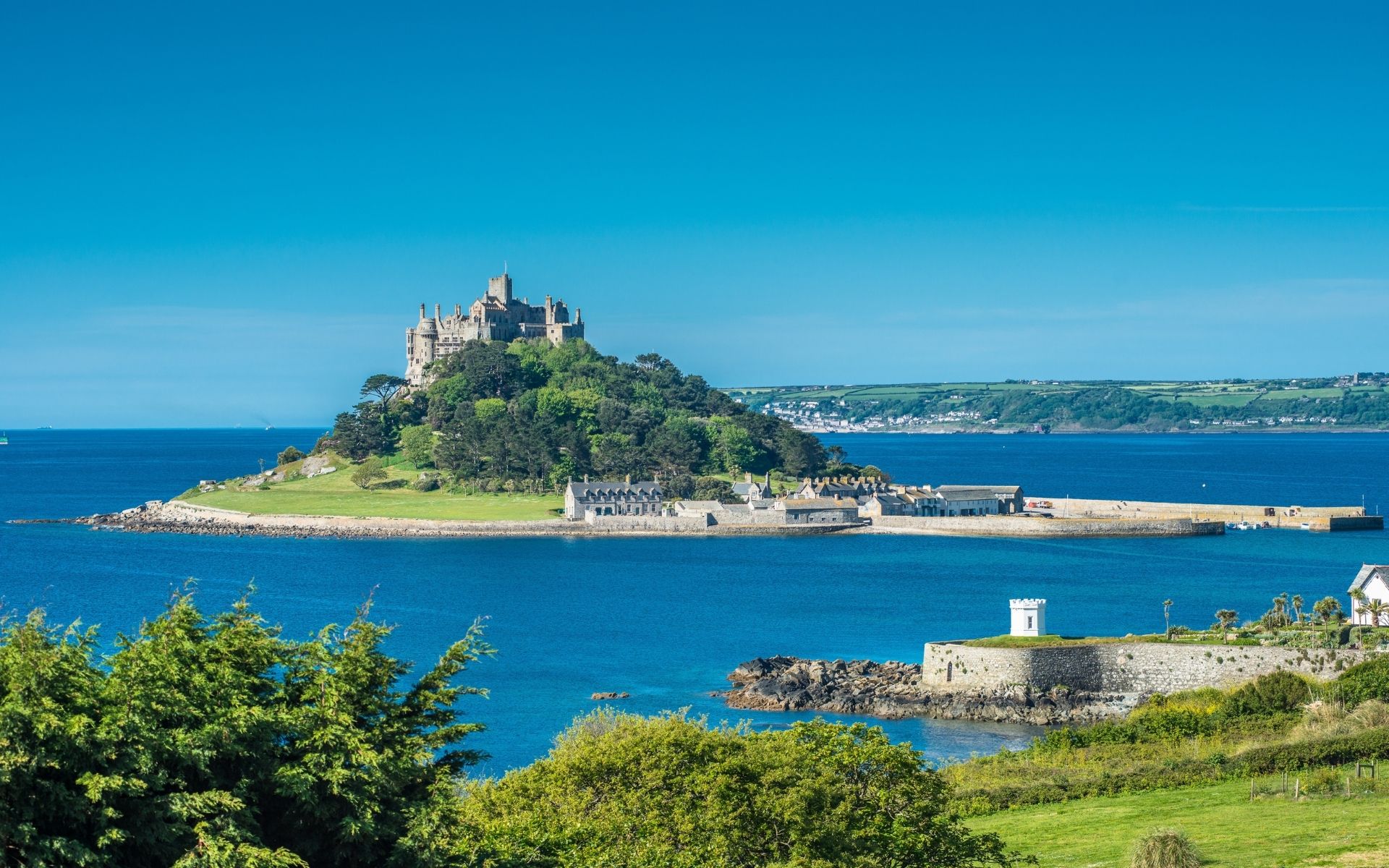 Everyone takes the view from the causeway, so for a more unusual picture, go down little Leys Lane at the east of the town and take the steps down to the beach. You’ll be rewarded with a glorious view of the Victorian side of the castle and its gently wooded slopes. The backdrop of Mount’s Bay isn’t bad, either.

The ruins of an engine house, silhouetted against the sky, is one of the most iconic images of Cornwall. The “Cornish castles” are scattered around the county: take your pick. Our favourites are down in the South West of Cornwall, that jagged bit of coast where captain Poldark mined for tin. 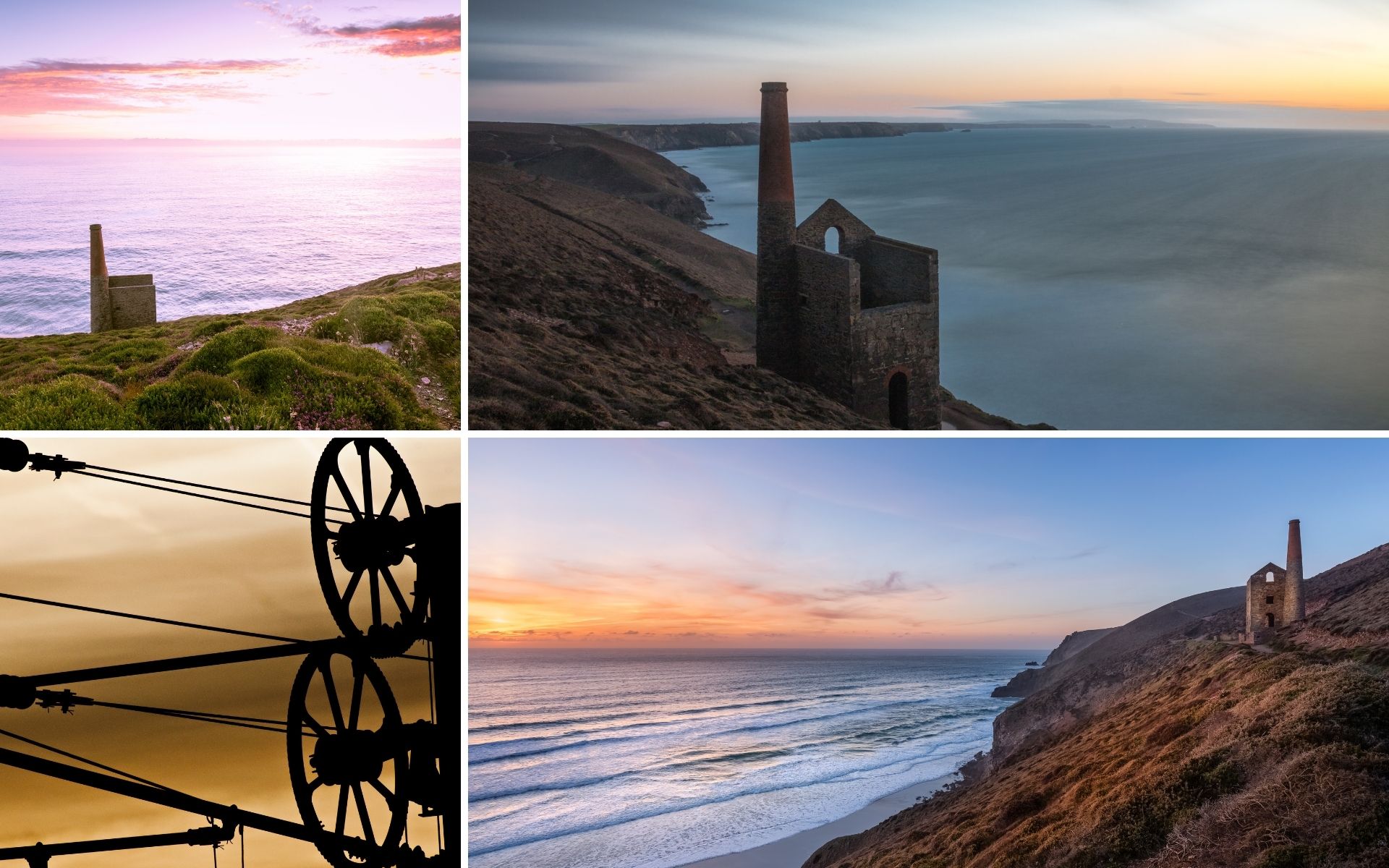 The BBC1 drama was actually filmed at the National Trust’s Botallack Mine near St Just. With the Atlantic providing the backdrop, this is one of the best places to capture that engine house shot. Want something more industrial and rugged? Try Heartlands in Pool near Redruth.

This Cornish fishing port is postcard-perfect. Padstow has a maze of pretty streets with independent shops, a busy working harbour, and access to some great coastal walks and beautiful beaches. 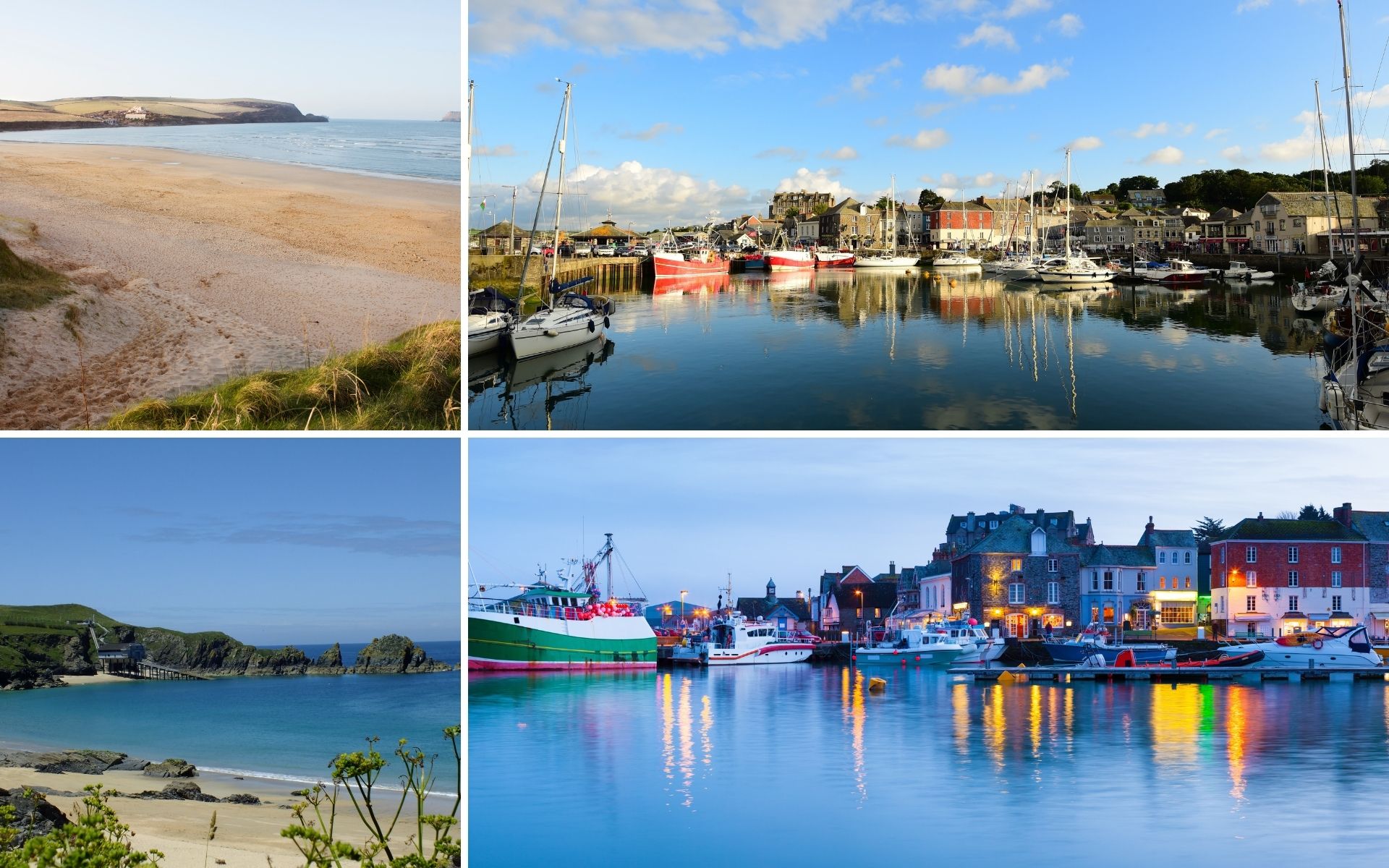 Made famous as a foodie paradise by chef Rick Stein, the main thing to get on your Padstow Insta is food. Set up a shot of Stein’s takeaway fish and chips by the harbour (setting one of your party on seagull watch), or treat yourself to a meal in one of the town’s many pubs and restaurants.

Standing on a headland on the wild North Cornwall coast, the remains of Tintagel Castle have a breath-taking (and vertiginous) setting. The bridge that spans the two halves of the site has to be walked across to be believed (or not, if you don’t like heights). 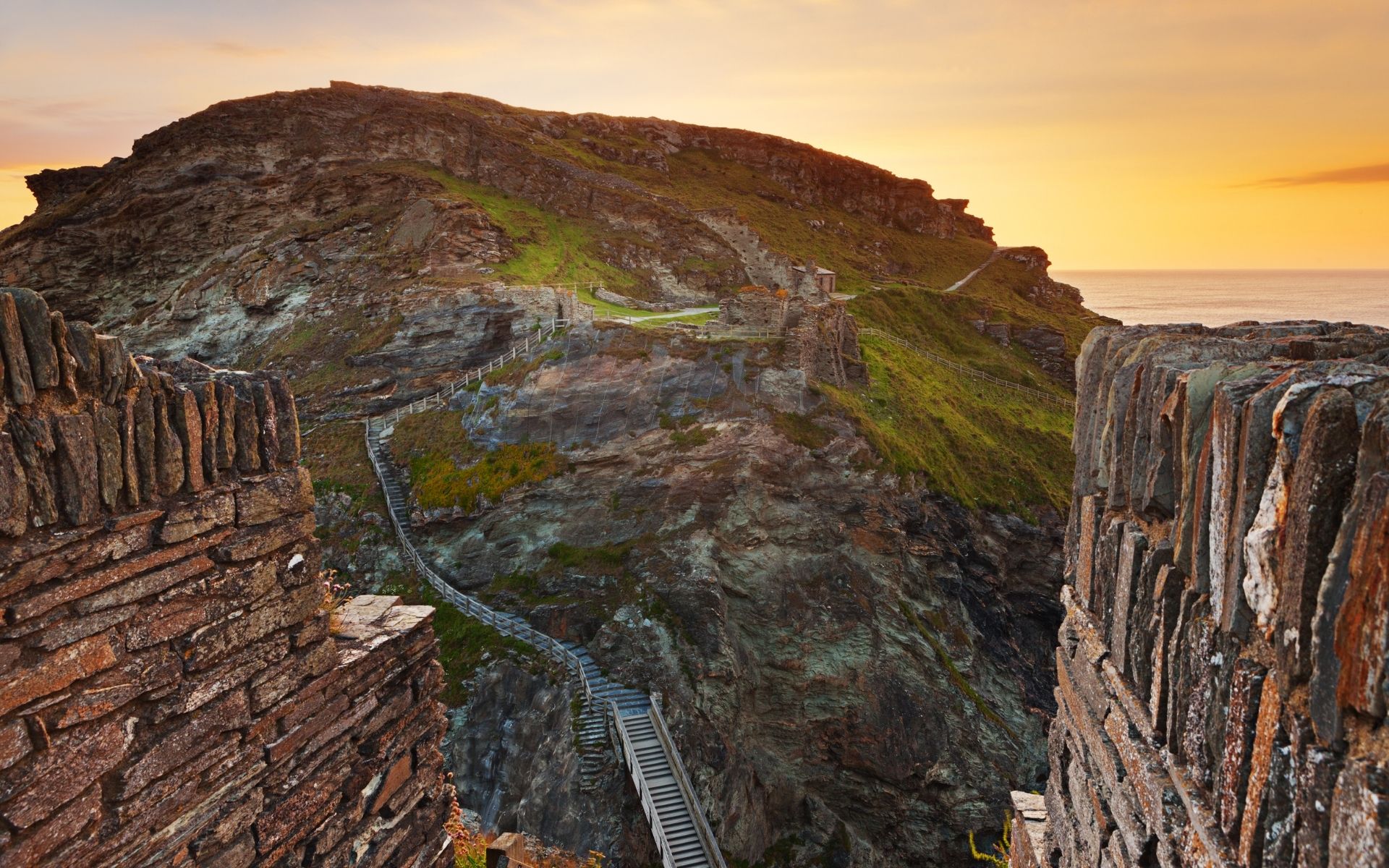 As well as the bridge, the other must-take photograph is of the imposing bronze statue of King Arthur, who’s said to have been born at Tintagel.

This has to be done: a photo by the signpost at Land’s End. The place itself is mostly attractions and shops; however, head to the cliff path behind the hotel for sweeping views across the sea towards Longships Lighthouse and the Isles of Scilly. Stay until the evening to catch the last glimpse of the setting sun in mainland England. 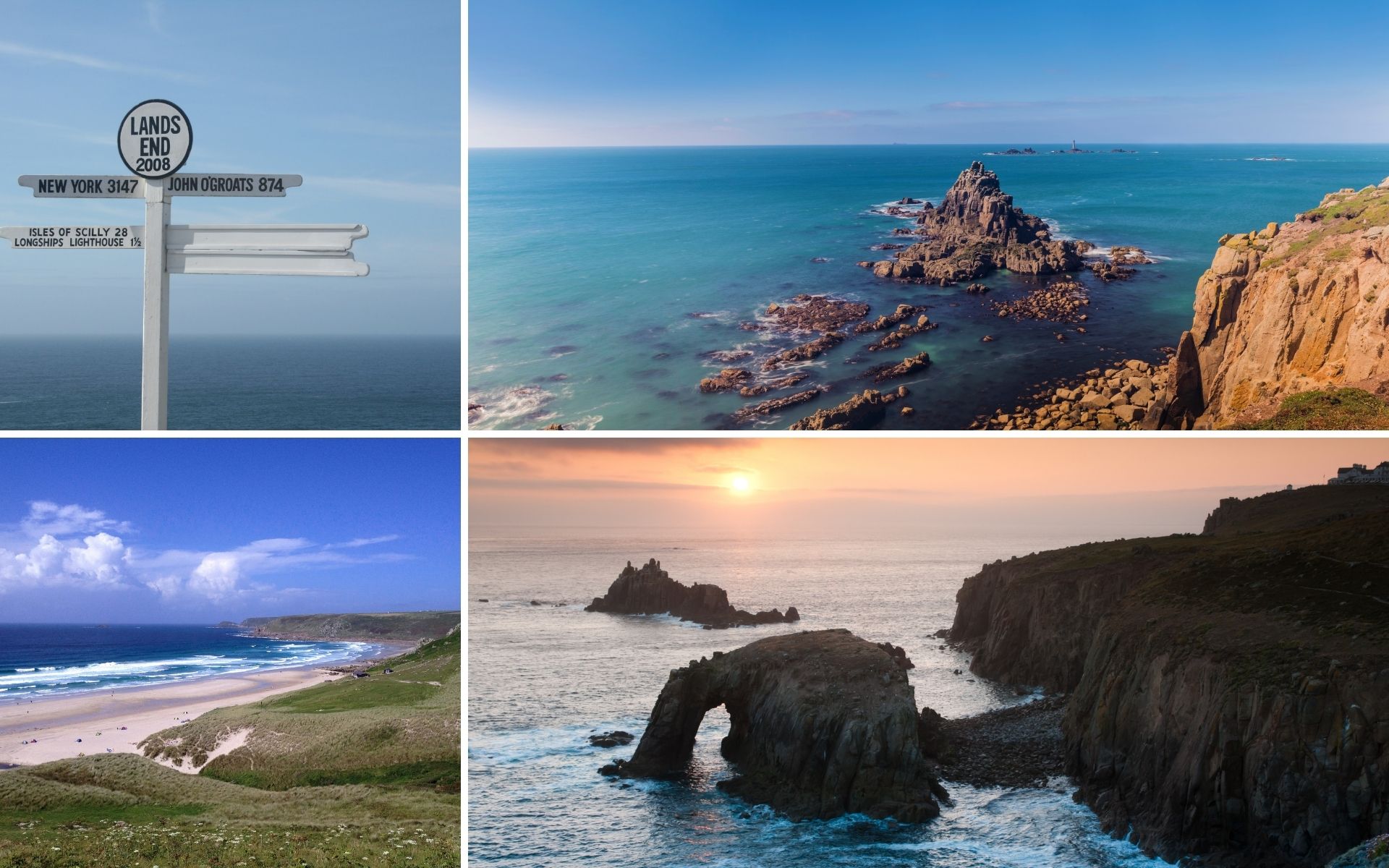 Explore other scenic spots in West Penwith while you’re there. Head down to Sennen Cove with its white sands and surfers, and drive back across some beautifully bleak moorland.

The sands of Fistral in Newquay, the colourful boats and bunting of Mevagissey, the majestic sweep of Falmouth’s huge harbour… We could go on! For further inspiration, check out our Instagram, @the_cornwall and remember to tag us in your posts.